Angioedema is an intense often disfiguring but temporary swelling of a localized area which usually involves superficially lying structures like skin, mucosa along with subcutaneous tissues. Areas which are often affected by angioedema have a wide range starting from the face, lips, tongue, pharynx, the supraglottic area and rarely, the subglottic area. It might also effect the gastrointestinal mucous membranes, genitalia, hands and feet. There maybe variety of causes for development of angioedema including various drug intake, insect bites or stings and certain types of food products particularly nuts, milk and eggs. Levamisole is known to have anthelminthic and immunomodulatory properties and is a common contaminant in cocaine due to its mood stimulatory action. Here we report a case of a 60-year-old female who presented with angioedema following ingestion of a drug known as levamisole for its anthelminthic activity.

Angioedema is a abrupt onset swelling having short duration involving the skin as well as the mucous membranes. Although a wide range of parts of body may be involved but the swelling most commonly arises around the eyes and lips. Angioedema can vary from a benign disease to a life threatening swelling involving the respiratory tract and intestines. Acute pain in abdomen or recurrent chronic pain of the abdomen can be rare presenting symtoms. This pain in the abdominal is often described by the patient to be of cramping or colicky type. Levamisole is a synthetic imidazothiazole derived drug which has antihelmenthic properties along with immunomodulatory functions.1

In the past levamisole was used to treat inflammatory conditions such as rheumatoid arthritis, crohn’s disease and nephrotic syndrome. Common side effects include neutropenia, agranulocytosis as well as vasculitis.2 Rarely more severe side effects ranging from leukoencephalopathy, arthritis, type 1 and 3 hypersensitivity reactions, ulcers of mouth and skin to various gastrointestinal symptoms might be seen.3

A 60-year old female patient presented with complaints of swelling of face including the eyes and lips and rashes over bilateral upper limbs and back since 2 days.(Figure 1). There was no history of difficulty in breathing, itching, headache, fever, cold, cough, palpitations, chest pain.

No h/o oral or nasal regurgitation

There was no any sensory involvement. Patient had a history of intake of Tablet levamisole for 2 days prior to her onset of symptoms which she was taking as a anti helminthic agent 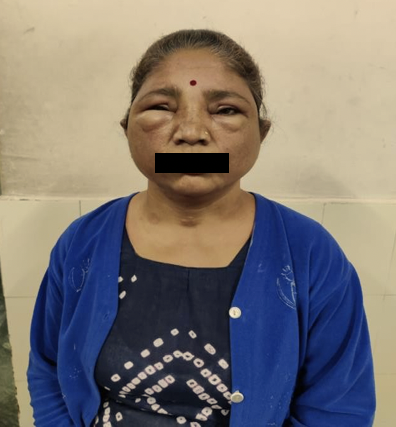 No history of fever, jaundice, joint pains or rashes. On general examination patient had pulse of 98/min and blood pressure was 100/80mmhg. Patient was adequately built. Patient had facialpuffiness with swollen eyes and lips. Red rashes were found on the dorsal aspect of the forearm and back which were not associated with itching.

Patient was immediately admitted in ICU and started on injectable steroids along with anti histaminics. Tablet levamisole was discontinued. During the course of hospital stay patient improved clinically and her swelling reduced significantly. She was discharged 5 days later and is doing well on follow up.

Pathophysiology of Angiodema is due to a quick increase in the permeability of submucosal or subcutaneous capillaries and post capillary venules with extravasation of plasma locally. Most causes of angioedema are based on release of histamine or bradykinin however other substances that are vasoactive might be contributory.

Release of Histamine can occur due to antigen dependent cross linking with immunoglobulin E to the surface of mast cells or basophils forming a cascade of allergic reaction. However, Activation of these same cells can also occur due to auto immune pathology by formation of antibodies that are IgG antibody against IgE or IgG. Angiodema accompanied with urticaria is caused due to release of histamine. Angiodema is most commonly seen with urticaria and rarely without it.

Bradykinin is the key modulator of angioedema which is in association with angiotensin-convertase enzyme inhibitor (ACE Inhibitor) which inhibit the destruction of Bradykinin hence increasing its concentration in the body. Bradykinin is formed from plasma or tissue-bradykinin forming pathway.

Swelling that is associated with angioedema are often symmetrical facial or puffiness of hands or peripheral pitting edema or persistent facial swelling.

Levamisole, is a drug which is an anthelmintic and it’s use is associated with neutropenia, agranulocytosis, vasculitis or vasculopathy associated with skin manifestations and can mimic certain autoimmune diseases.5 Commonly seen a contaminent in cocaine levamisole has limited spectrum for use in today’s time.6 In our unique case we have reported a case of a middle aged female who had suspicion of helminthic infection for which she had taken levamisole and had presented with angioedema with swelling of face and around eyes which subsided later with steroids and anti-histaminic.

In this case report a drug induced angioedema lead to presentation with swelling over the face along with rashes and it responded well to steroids and anti histaminics. To conclude, this case highlights one of the rare drugs such as levamisole manifesting with an adverse reaction like angioedema which with prompt diagnosis and careful selection of management was manageable with Intravenous steroids.

J A Buchanan J A Vogel A M Eberhardt Levamisole-Induced Occlusive Necrotizing Vasculitis of the Ears After Use of Cocaine Contaminated with LevamisoleJ Med Toxicol20117183410.1007/s13181-010-0097-3

© This is an open access article distributed under the terms of the Creative Commons Attribution-NonCommercial-ShareAlike 4.0 International License which permits unrestricted use, distribution, and reproduction in any medium, provided the original author and source are credited.