Idiopathic pulmonary fibrosis (IPF) is an interstitial lung disease characterised by chronic, progressive scarring of the lungs. It is a relatively rare disease, afflicting those 50–70 years of age, slightly more common among men than women, without racial predilection. The most common complaint is progressive shortness of breath. Pulmonary function testing reveals a restrictive Ventilatory defect with a diminished diffusion capacity Despite advances in therapy progress has been challenged by a poor understanding of pathological mechanisms and patient heterogeneity, including variable progression. The outcome of the disease is poor and patients often succumb to mortality in few years

The terms interstitial lung disease (ILD) and diffuse parenchymal lung disease are imprecise clinical terms for a diverse range of diseases (130 disorders) that involve inflammation and fibrosis of the alveoli, distal airways, and septal interstitium of the lungs. ILD involves abnormalities of the interstitium, the potential space between the epithelial and capillary endothelium basement membranes within the alveolus.1 Idiopathic pulmonary fibrosis (IPF) is a common form of interstitial lung disease (ILD) and occurs predominantly in middle-aged and older adults. It accounts for 20% to 30% of ILDs and is usually progressive, resulting in respiratory failure and death. 2 The most common symptoms of IPF are dyspnea and cough. Dyspnea is usually exertional and associated with walking up inclines or steps. The cough is typically described as “dry” and “hacking,” and may start with a tickle in the throat. The severity of these symptoms varies. Other possible symptoms of IPF are fatigue and problems with sleeping. Symptoms that have not been associated with IPF include chest pain, fever, rash, weight loss, and myalgia or arthralgia, although these may be seen in various other forms of ILD. Cyanosis, cor pulmonale, peripheral oedema are observed in terminal stages. The 5-year survival rate of 20–40% associated with IPF is worse than that of cancers. Smoking, environmental exposures, gastroesophageal reflux disease (GERD), infections, and genetic predisposition are potential risk factors for the development of IPF. The incidence of IPF increases with older age, with presentation typically consisting of insidious onset of dyspnoea in the sixth and seventh decades. 3 The estimated prevalence of IPF in the United States (US) ranges from 14-43 per 100,000 population.4 Mutations in the genes encoding telomerase (TERT and TERC) cause IPF through shortening of telomere lengths and probable exhaustion of lung stem cells. All of the mutations are individually rare, but, collectively, TERT mutations are the most common genetic defect found in Familial pulmonary fibrosis. The overall penetrance of pulmonary fibrosis in TERT mutation carriers is 40% in subjects with a mean age of 51 years. Penetrance increases with advanced age, and is positively associated with fibrogenic environmental exposures. 5 IPF is associated with pulmonary or extrapulmonary comorbidities. Pulmonary comorbidities include pulmonary hypertension, emphysema, and lung cancer, while non-pulmonary conditions include venous thromboembolism, coronary artery disease, congestive heart failure, sleep-disordered breathing, gastro-oesophageal reflux disease, and anxiety or depression. 6 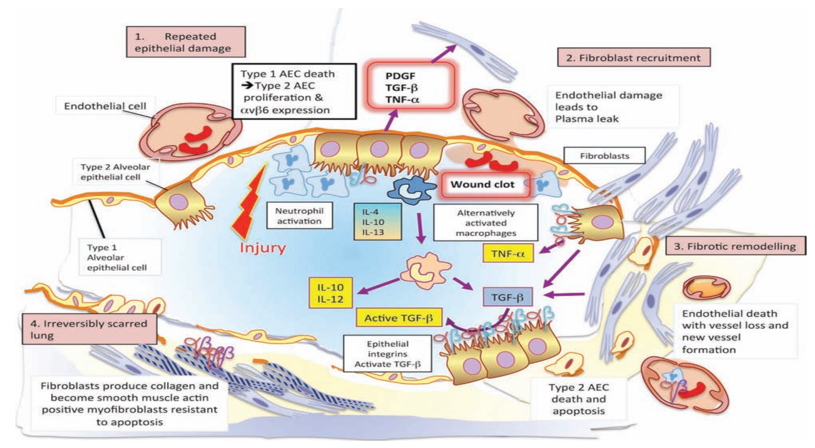 In an initiating phase, there is lung alveolar epithelial damage with loss of the normal lung architecture and disruption of the basement membrane across which gas exchange takes place. With further epithelial damage and apoptosis, comes upregulation of epithelial integrins, such as αvβ6, and a phase of fibroproliferative repair dominates – driven by high levels of TGF-β. Locally activated TGF-β drives the recruitment of fibroblasts and a feed-forward cycle of further TGF-β production. Under these conditions, fibroblasts differentiate into myofibroblasts that express high levels of integrin αvβ6, are resistant to apoptosis and lay down a collagen matrix. Once collagen has been laid down in a lung, the architecture of which is already distorted, gas exchange is no longer efficient. 7

IPF should be considered in middle-aged/elderly individuals with unexplained chronic exertional dyspnea. It commonly presents with cough and bibasilar inspiratory crackles (sometimes referred to as “Velcro rales” because of their sound) and less often with finger clubbing (spoon-shaped nails). Spirometry may be normal or show restriction (in contrast to obstruction such as in chronic obstructive pulmonary disease [COPD]). Diagnosis of IPF requires exclusion of known causes of ILD, including systemic autoimmune diseases and environmental exposures, and the presence of a usual interstitial pneumonia (UIP) pattern on high-resolution computed tomography or lung biopsy. HRCT features frequently seen in UIP include honeycombing, traction bronchiectasis, and traction bronchiolectasis, which may be seen with the concurrent presence of ground-glass opacification and fine reticulation. 8

Now there are over 450 drugs recognizing as being implicated in interstitial lung disease.

Regardless of the cause of IPF the goals of treatment are:

The treatment approach to IPF has evolved considerably over the last two decades. A typical regimen in the year 2000 involved immunosuppression with prednisolone and azathioprine. A combination of prednisone, azathioprine, and N-acetylcysteine (NAC) has been widely used as a treatment for idiopathic pulmonary fibrosis. N-Acetylcysteine (NAC) at a dose of 600mg three times daily, added to prednisolone preserves Forced Vital Capacity (FVC) and Carbon Monoxide Diffusing Capacity (DLCO), thus slowing the deterioration of pulmonary function in patients with Idiopathic Pulmonary Fibrosis (IPF) better than prednisolone mono therapy. 11

Azathioprine is prescribed as part of the treatment of a number of ILDs (not IPF), in combination with prednisolone as a steroid sparing agent attempting to halt the progression of fibrotic disease. In most ILD patients, azathioprine will be trialed for a minimum period of three months (British Thoracic Society Interstitial Lung disease guideline, September 2008).

Pirfenidone targets: Different targets in vivo and in vitro for PFD have been described, the most prominent being inhibition of TGF-β1 and TNF-α. However, it has also been shown that Pirfenidone has either direct or indirect action on other molecules such as collagen I, PDGF, IL-6, IL-1β, IL-13, IL-12p40, fibronectin, HSP47 and ICAM-1. To be taken with food. Recommended dosage: 801 mg three times daily (2403 mg/day). The most common adverse reactions (≥10%) are nausea, rash, abdominal pain, upper respiratory tract infection, diarrhea, fatigue, headache, dyspepsia, dizziness, vomiting, anorexia, gastro-esophageal reflux disease, sinusitis, insomnia, weight decreased, and arthralgia.14, 15 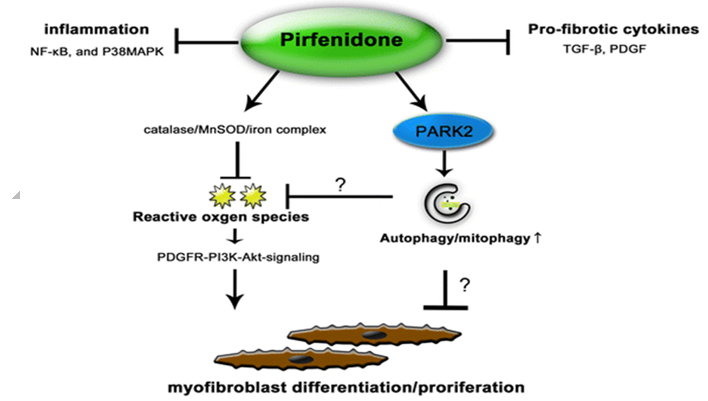 Rituximab works by destroying B cells, a type of white blood cell, called a B-lymphocyte, which produce autoantibodies. Rituximab represents the most widely used biologic treatment in patients with rapidly progressive RA-ILD who are unresponsive to first line therapeutic compounds including corticosteroids and methotrexate In IPF research study, rituximab will be given into a vein to reduce the autoantibody levels that believe might be contributing to the lung damage in IPF.18

Domiciliary oxygen therapy is often prescribed for patients with hypoxaemia due toadvanced lung disease, most commonly chronic obstructive pulmonary disease (COPD) and interstitial lung disease (ILD). Long-term oxygen therapy (LTOT) trials conducted in patients with COPD in the 1980s remain the basis for clinical decisions and guideline recommendations regarding LTOT for patients with non-COPD conditions as there is a lack of high-quality evidence concerning its use in the non COPD population.19

The majority of non-pharmacological management strategies apply to all patients with fibrotic ILD, regardless of progression or the underlying etiology. Smoking cessation, antigen avoidance, protection from occupational exposures, and cessation of medications that can potentially cause ILD are all important. Pneumococcal vaccination and annual influenza vaccination are also appropriate in almost all patients with fibrotic ILD.  20

Galectin-3: is another circulating protein which plays a key role in fibrosis development through the activation of macrophages and myofibroblasts . (Galecto Biotech AB, Copenhagen, Denmark,  has been developed as a specific inhibitor of the galactoside binding pocket of galectin-3. It is administered via inhalation and is currently being investigated in a phase I trial.

Pentraxin-2 (PTX-2), also known as serum amyloid P, is a circulating protein which binds to Fc-gamma receptors on monocytes and promotes epithelial healing. Its being evaluated is in Phase 1 study.

(IL-13) is a T-helper type 2 (Th2) cell cytokine that promotes lung fibrogenesis in a number of experimental settings. Lebrikizumab, tralokinumab are under evaluation.

IPF mostly afflicts people 50–70 years of age, The prognosis is poor, with a mean survival of about 2.5–5 years after definite diagnosis which makes IPF as a non benign disease which is difficult to predict. At present, nintedanib and pirfenidone {Anti-fibrotic agents} are routinely used to treat IPF based on phase III clinical trials demonstrating a reduced rate of decline in FVC over time among patients with IPF taking either medication. Definitive long-term therapy is lung transplantation where also the results are not very encouraging.

G Margaritopoulos E Vasarmidi K Antoniou Pirfenidone in the treatment of idiopathic pulmonary fibrosis: an evidence-based review of its place in therapyCore Evid201611112210.2147/ce.s76549

I. A. Dimitroulis Nintedanib: A Novel Therapeutic Approach for Idiopathic Pulmonary FibrosisRespiratory Care20145991450510.4187/respcare.03023

© This is an open access article distributed under the terms of the Creative Commons Attribution License Attribution 4.0 International (CC BY 4.0). which permits unrestricted use, distribution, and reproduction in any medium, provided the original author and source are credited.